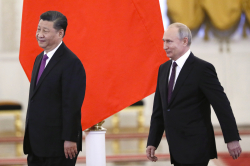 Editorial Board, The Wall Street Journal

The U.S. Navy announced Tuesday that the Theodore Roosevelt Carrier Strike Group entered the South China Sea for “routine operations” amid a Chinese maritime militia standoff with the Philippines. China’s provocation comes as Russia has surged forces near Ukraine. The Biden Administration may be getting an early test of whether its model of liberal multilateralism can deter revisionist powers pushing against U.S. interests.

The Philippines began to sound the alarm last month over Chinese militia boats, at one point totaling 220,…