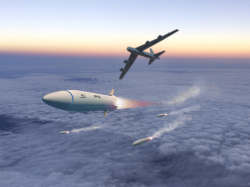 The first booster flight test of the Air Force’s AGM-183A Air-launched Rapid Response Weapon failed April 5. In a release issued April 6, the service acknowledged the failure is a “setback” for hypersonic progress, but said the test still provided “valuable information” for the program’s development.

The test, which was conducted at Point Mugu Sea Range, Calif., was supposed to be the first time ARRW fired its booster vehicle and flew on its own, but the missile did not “complete its launch sequence” and remained on the B-52H…