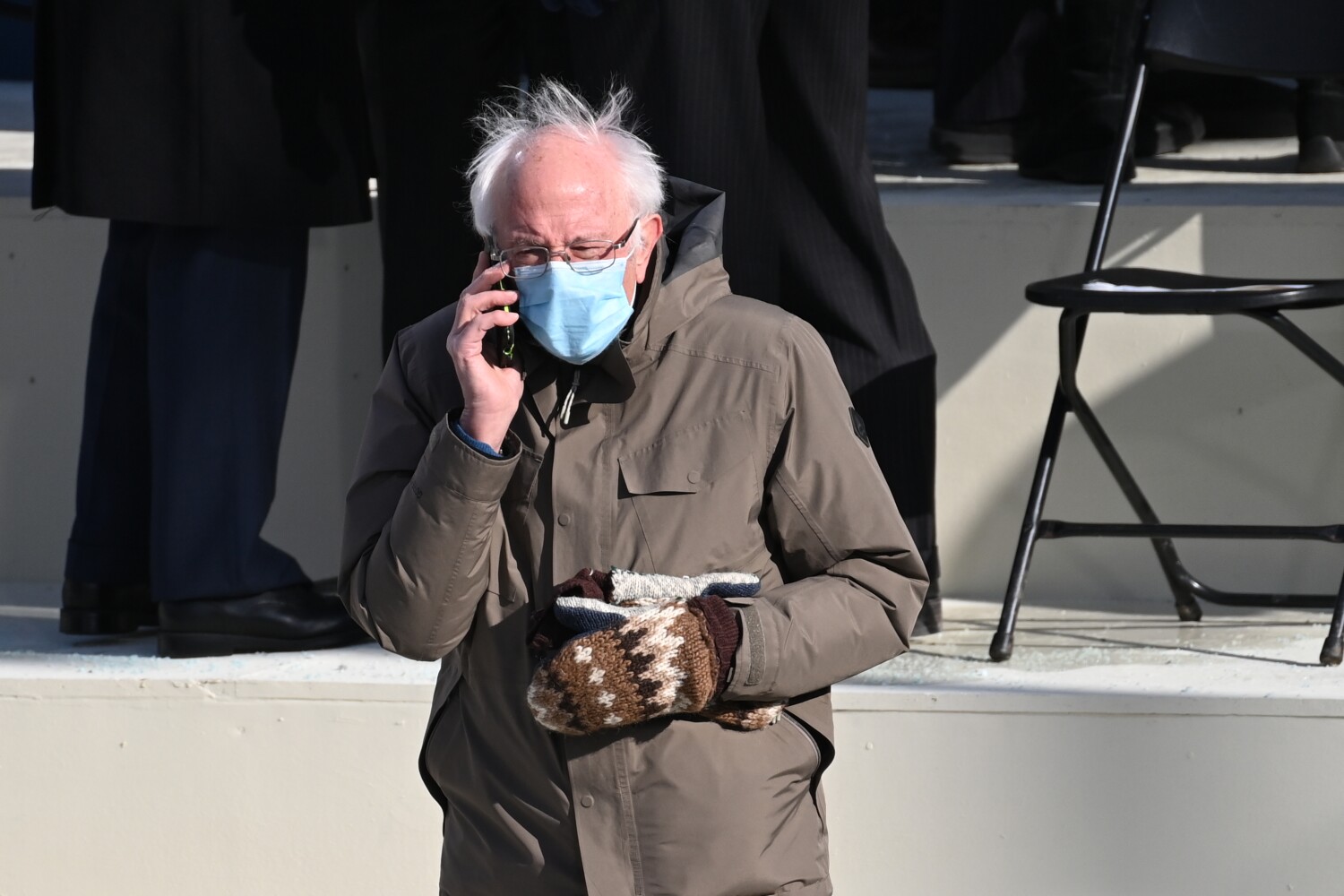 Bernie Sanders’ mittens were internet-famous long before he struck the pose at the inauguration of President Joe Biden and Vice President Kamala Harris on Wednesday morning that would come to be known as “grumpy chic.”

The gloves — made from repurposed wool sweaters and lined with fleece made from recycled plastic bottles — first blew up when Sanders wore them a year ago, in January 2020, at the Seacoast Women’s March in Portsmouth, N.H. He was then still a front-runner in the Democratic primary race — and Donald Trump was about to begin his first impeachment trial.

“We are in an important moment, a moment when the entire world is watching,” Sanders said at the time. “I could say a lot of bad things about Trump and I do — every day. But what I want to say is that the function of a president is to bring people together, whether they are white, Black, straight or gay. We cannot accept the divisiveness of this president who is trying to tear us apart by pitting one group against another.”

The world was watching. But not as Sanders might have expected.

Two days later, the @BerniesMittens Twitter account was born. “Feeling the BERN not the BURN #ovenmittens,” the account’s bio reads. “Mittens are the only thing that can keep Bernie’s hand gestures under control.”

The fan account traced the mittens through time, retweeting a December 2019 story about Alex Cutler, a food service attendant at the University of Pittsburgh Medical Center. Cutler showed Sanders around as part of the Service Employees International Union’s (SEIU) Walk a Day program, which asked presidential candidates to shadow working people.

They were waiting for the bus together, the SEIU vice president of strategic campaigns posted on Facebook. It was running late, and Cutler mentioned that her hands were cold. Sanders gave her his mittens. Cutler smiled.

As @BerniesMittens highlights, the brown, black and cream beauties were created by Jen Ellis, a second-grade teacher from Essex Junction, Vt., and a partner she designed the pattern with.

Bernie’s mittens are made by Jen Ellis, a teacher from Essex Junction, Vt. She gave them to him 2+ years ago and was surprised when he began wearing them on the campaign trail. They are made from repurposed wool sweaters and lined with fleece made from recycled plastic bottles. pic.twitter.com/ErLr29lY2t

“I just put in a little note that was like, ‘I believe in you, I’ve always believed in you and I hope you run again,’” Ellis told the alt-weekly. “And now he is running again, and he apparently is wearing the mittens that I made for him!”

Ellis was inspired by Cutler’s story, Seven Days reported, to send the campaign 10 more pairs of mittens to give out on the trail. The teacher specified that she wanted one pair to go to Cutler in Pittsburgh.

Ellis had been surprised to see the senator wearing her gloves on the campaign trail. But practical sartorial choices are hardly out of the ordinary for Sanders: Inauguration viewers on Wednesday morning were quick to point out his trusty Burton jacket. (Almost identical to the one from the “I am once again asking” meme.) Another global brand based in Vermont.

“You have eyes on the community when you’re a schoolteacher, and you really can see what happens when families don’t have access to adequate health care, don’t have access to basic human rights and needs,” Ellis told Seven Days in January 2020. “And so I feel like Bernie is speaking to everyone who interacts with humanity.”

Much of the internet felt the same way on Inauguration Day, turning Sanders’ pragmatic “fashion statement” into a Twitter moment. Viewers across the country fell for his brown Burton jacket, wool mittens, clear respect for social distancing measures and the inexplicable manila envelope he carried under his arm.

“Bernie arrives at inauguration, carrying what can only be a copy of The Plan in his manila envelope,” tweeted American Independent senior writer Oliver Willis.

The reactions, memes and sheer stanning of the mittens, however, took center stage.

Of course, putting politicians (or their mittens) on pedestals can be dangerous. As Sanders’ outfit on Wednesday morning demonstrated, politicians are just people, too.

Omitting Cuomo Scandals, CBS Gets Combative With Noem on COVID

A Radical History of Tennis? – Reason.com

The Roaring 2020s? A Look At What The Post-Pandemic Economy Could Look Like – CBS Boston

The Roaring 2020s? A Look At What The Post-Pandemic Economy Could Look Like – CBS Boston

Raptors Versus Bulls Postponed On Sunday Due To Contact Tracing

Dodgers: Mookie Betts on Trevor Bauer ‘You Know What You’re Getting’

Bale: I’ve been happy all season at Tottenham

Can You Stream Netflix in 4K with 5G?