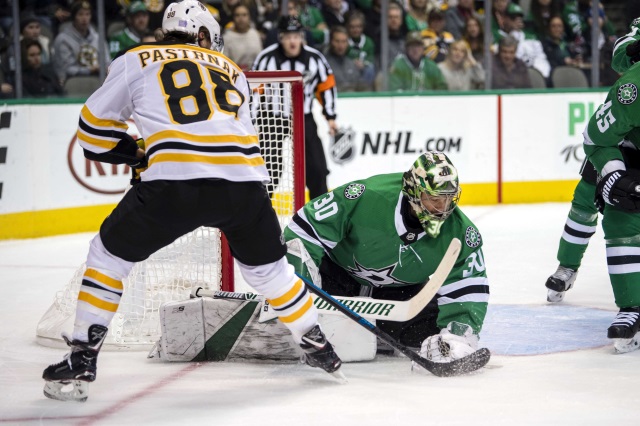 Updates on Pastrnak and Marchand

When the Bruins return from their road trip Sweeney “expects him to be fully integrated into practices.”

Steve Conroy: GM Sweeney said they expect that forward Brad Marchand will be back on the ice and in their lineup for their season opener. He had offseason hernia surgery.

Blackhawks add one to the LTIR, one to the IR, and update on Seabrook

Mark Lazerus: Chicago Blackhawks forward Alex Nylander has been put on the LTIR with a knee injury.

Forward Zack Smith was put on the IR. He had just cleared waivers so that might need an explanation.

Bowman said that the organization will go into more detail soon as to why Seabrook has been out.

Khudobin had COVID this offseason

Sean Shapiro: Dallas Stars goaltender Anton Khudobin said that he had COVID this offseason and dealt with it for three weeks.

Mike Morreale: Ruff on Hischier: “Nico is progressing. I actually talked to him on the way over to this interview and he’s doing well, but he’s not there yet. He hasn’t even skated yet, so not to tip my hat or anything, but he’s not close for opening night.”

COVID concerns for the Canucks

Canucks GM Jim Benning said on Sportsnet 650 on Tuesday that they would have more information . Benning added that neither player is available.

Miller has been staying with Benn. Miller practiced on Monday and Benn didn’t. Sunday’s Canucks practice was canceled and they late said it was a false positive.

If a player has a false positive they must have three negative tests for the three days following.

Forward Jayce Hawryluk has missed the past two practices with an upper-body injury and is day-to-day.

Matthew Sekeres: “My understanding is that due to COVID-19 concerns, D Jordie Benn and F JT Miller will not be with the #Canucks for a couple of weeks. Both players are quarantining. Miller had been staying at Benn’s Vancouver residence”

Richard Zussman: “I am told one of these two players tested positive for COVID, then negative, then positive again and when tested a fourth time tested negative. The other is a close contact.”

Rangers lines get a shuffle, Tony DeAngelo back in the lineup

NHL Rumors: Painting a Picture Of How the Keith Yandle Situation May Have Went Down

[StatsCentre] Thanks to a 2nd assist tonight that puts his team up 3-0 through 2 periods against the Kings, Nathan MacKinnon has become the 4th player in Avalanche history (1995-96 to present) and the 7th with the Quebec Nordiques/Colorado franchise (1979-) to post at least 500 career points

Rangers lines get a shuffle, Tony DeAngelo back in the lineup