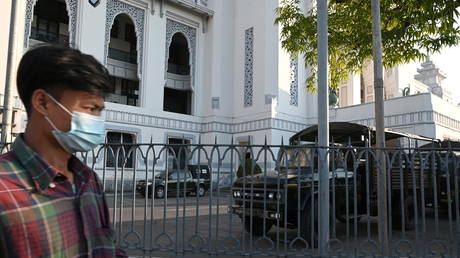 Myanmar military has seized power in the country, saying it’ll be in charge for a year, imposing state of emergency over what it sees as rigged elections won by the party of Aung San Suu Kyi, now reportedly under arrest.

With most of the TV broadcasting cut off amid rumours of a military coup in the making, military-owned Myawaddy TV announced Monday morning that commander-in-chief of the Myanmar Armed Forces General Min Aung Hlaing will be taking up the reins over the country for one year.

The channel reported that the military invoked a state of emergency in accordance with the constitution, which provides it with far-reaching emergency powers.

The military, known locally as the Tatmadaw, doubled down on its allegations of the voter fraud in the November general elections, citing the civilian government’s failure to investigate these allegations as one of the reasons behind the move.The Tatmadaw also aired grievances over Suu Kyi’s ruling National League for Democracy party’s refusal to put off elections over coronavirus, as demanded by the military-backed Union Solidarity and Development Party (USDP) and 24 other parties.

The military has yet to clarify the status of Suu Kyi , who, along with Myanmar’s President Win Myint and several other high-ranking officials, were reported to be detained earlier on Monday.

The tensions between Suu Kyi, who was vehemently opposed to the military rule as a pro-democracy activist, and the all-powerful armed forces have been running high since before the election. However, the November vote, that saw the 1991 Nobel laureate’s party winning 396 seats out of 476 in the bicameral parliament, apparently exacerbated the situation, sparking voter fraud claims from the military, alleging that they’ve found a whopping 8.6 million irregularities in voter lists. On Thursday, Myanmar’s election commission rejected the allegations, arguing that there was not enough evidence in support of the claims.

In the run-up to the takeover, the military signalled it would not back away from the claims of rampant voter fraud. Last week, a military spokesman warned that the army was about to “take action” and implored observers “to wait and watch.”

Suu Kyi’s apparent removal from power comes just several hours before the legislature was to convene for the first time and elect the country’s president for the next five years.